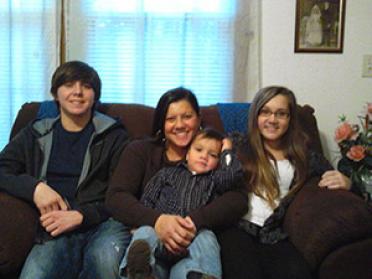 A parent’s story
When I went into labor with my youngest son in June 2012, I refused to go to the hospital, believing a positive drug test would mean my baby would be taken from me. In a lot of pain, I finally decided I had to go to the hospital. After learning of my drug use during pregnancy, the hospital contacted the Tennessee Department of Children’s Services (DCS). Following through on the requirements I discussed with a DCS case manager, I completed a 90-day treatment program. The day before DCS was going to close my case, my baby’s father and I got high together. He and I had a physical fight, and I took out an order of protection against him. DCS decided to keep my case open, told me I needed long-term recovery care, and suggested I go into the Renewal House Family Residential Program.

I first tried alcohol when I was 14. Years of drinking alcohol, smoking weed, and using cocaine and other drugs followed. I was 37 when I was admitted to Renewal House with my youngest son in December 2012. At Renewal House, I learned to be independent and to take responsibility. I even catch myself now using skills learned at Renewal House—skill that I didn’t give much thought to at first, such as being specific when I tell my child he’s done something wrong and making a point to praise him when he’s done something good. In the spring of 2013, DCS closed my case with the understanding that I would continue in the program and meet all the requirements to graduate. I graduated in February 2014. I continue to benefit from the comprehensive recovery support Renewal House provides, including expanded services made possible by the Children’s Bureau Family Connections grant.

Years before I came to Renewal House, I lost custody of my first two children, a son and a daughter. While I was living at Renewal House, in fact the day after I announced in a Renewal House group session that I’d accepted the probability that I would never see my older children again, my daughter, who had found me on Facebook, sent me a message that simply said “Hi mama.” After years apart, I was able to reunite with both my older children.

Now, I have more than 2 years of remaining clean and sober. I have an awesome life and I am so grateful. I have a great support group—my recovery sponsor, Renewal House alumni, and my family. I have an apartment in my name. I have a job and love going to work. Most importantly, I have ALL of my kids in my life.